Get up to €600 in compensation. Once you have submitted the claim, the company will contact you within 2 business hours. 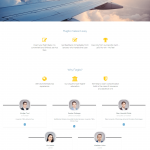 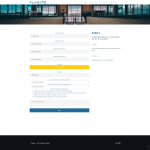 Flagito.eu is a flight claims management company from Estonia. It was founded in 2017 and is a rather small player in the industry. Flagito focuses primarily on dealing with clients that experience flight delays, cancellations and those that were denied boarding their flight, so they don’t take on with cases that involve baggage. Flagito.eu is a legitimate company that operates within the legal framework of Regulation (EC) No 261/2004. Please continue reading the review to find out more about it.

Flagito provides its services in English, Estonian, Russian, and Finnish. When using this company’s service, users get personalized assistance as there are not automated emails. The clients receive status updates and answers directly from the claim managers. Flagito.eu lacks online chat support, so all communication between the clients and the company is done via email, Facebook Messanger, and phone.

This company’s bare-bones website features a simple flight compensation form. First, the user has to select the disruption type and then fill out the remaining information, necessary to file a claim. The website is smartphone-friendly as it works smoothly and is easy to navigate. However, unlike many of its competitors, Flagito.eu doesn’t have a compensation calculator so its clients don’t know how much they can expect to get. Furthermore, users can’t create an account on this company’s website. So there is no user area where they could check the status of their claim. Flagito.eu is focused on claim filing and doesn’t feature any useful information on air passenger right or Regulation (EC) No 261/2004 and also lacks an FAQ. While Flagito lacks some additional features, it has all the essentials for its clients to file claims and get compensation from an airline.

While Flagito is known for being transparent with its clients, their website doesn’t comply with GDPR or have a secure cookie policy. Nevertheless, most customers are satisfied with the service this flight claims management company provides, as indicated by a very respectable 4.9/5 rating on Facebook. However, there are no reviews and rating from TrustPilot as this company has not been registered there. Nevertheless, many people find Flagito a competent and credible company and entrust it with handling their claims.

Very grateful to Flagstaff for quick and smooth business! I’m sure you do.

Good work by Flagstaff! A year ago, we received a nice compensation, even though it was a troubled airline.

Super work by Flagstaff! Despite the fact that it was a problem airline that has consistently ignored requests for passenger benefits, and even the estonian consumer protection agency, we have received compensation from our flag. Thank you very much, and I certainly recommend that you use your help in fighting airlines.

Good company and great job! People, stand up for your rights! The hardships of travel will soon be forgotten when your day-to-day troubles are in the back. But it’s worth it. Everyone has to take responsibility for their work. If it goes wrong, you have to admit it and fix it. It’s nice to have such a great company Flagstaff, who supports and helps.

Big help, and thank you so much for the real man! They act quickly and the result is positive for the customer. I would like to recommend to koyasan to use professional help with the airlines.

Very awesome service! I’ve also had a few times before that the flight was abandoned or delayed, but I never wanted to take time and bothered to see if it was somehow compensated. When I was flying home from Manchester, it was supposed to be in Copenhagen, but the first flight was 1,5 hours late, and then I missed the second flight. I stayed in Denmark. I only got to tallinn the next day in the middle of the day. Girlfriend Kristel knew about the Flagstaff team right away. I didn’t give you much hope, but I still filled the blanks on the flat website just in case. I soon received feedback that my business was taken in the proceedings, and in a few weeks, the compensation was in the account. England’s back-to-back plane tickets got covered in � The Ultimate with and thanks to a worthy service! Thank you very much to kristel for the recommendation and Kristian, who helped to make compensation possible. I’ll be sure to recommend it.

We had this experience. We turned to Flagstaff Inc. from the air carrier for damages for the delay in flight delay. We were just doing it out of curiosity, especially not hoping for the result and being very sceptical. FOR OUR BIG SURPRISE 2 weeks passed, the compensation had been received for us! Thank you so much!!! If you have experienced / problems with air carriers, I dare to recommend Flagstaff. Easy! Comfortable! Quick! You have nothing to lose – it is only necessary to fill one very simple form and mobilized a little patience! That’s great! Good for you!

Super job. A long mess was, but the men held up to the end and brought the victory home. 250 euros compensation like nak 🙂

Thanks to you for a quick and pro action!

It’s very quick and comfortable. The problem was solved in 12 days! Thank you so much and for the second time I will turn to you for help! 😉

I travel with my 1-Year-old child, and our flight was delayed for 6 hours due to a technical malfunction of the aircraft. Thanks to the flag team, the airline paid both of us compensation for the delay in flight. I suggest, in the event of a similar concern, to turn to the Flagstaff team, as they know exactly all rights and obligations and will not allow the airline to simply overlook its client.

Great experience, I’m sure I recommend a troubled flight! �

In February 2017, we traveled from Estonia to Spain through England. In England, we were waiting for a plane malfunction, which led to our flight to Spain for the next day. We spent the night in England at the hotel, and we reached the target point 23 h later than we originally had to. When we returned to our country, we contacted the Flagstaff team, and it started a long process. We have been very clear about what our rights are for compensation and we knew our options. In the meantime, there were people who already gave up, but the flagstaff lawyer didn’t give up and promised he’d take it to victory. Today, in January 2018, all of this ended with our victory, and everyone got their compensation. Thank you so much Kristian!

After five months, thanks to Flagstaff, Smart Lynx, I was able to reach out to compensation.

Very super action and quality of service. It wouldn’t have tolerated a long fight with the airlines. Flagstaff was effective. I will be sure to use it again, and I will recommend to others.

A very good experience – the whole process of making a statement up to the compensation took 2,5 months. Well, I’m sure you wouldn’t have the nerve and the time, but flagstaff did everything for us, informed us of every step, and the result was a pretty nice compensation for the airline.

If you don’t bother, or don’t know how to deal with flight trouble, go to them! Very quick response and good help!

Fast and professional service! I recommend!

A specific and convenient service! Strictly recommended for everyone who does not have time / bothered to fight airlines.

The team will be able to make a clear and reasoned statement of objections to the unfounded positions of airlines. I recommend it.

We recently traveled with a girlfriend to a rock stopover in Frankfurt, but what happened was that for technical reasons, the flight was postponed for 17 hours. After the trip, I went to Flagstaff, and a couple of weeks ago, we got a proper compensation from Lufthansa’s airline.

We lost one vacation day to Bulgaria when we travelled to Bulgaria because the flight was postponed for 24 hours, and Flagstaff helped us get the money back for it. Super comfortable and good work! Continue to turn to them and I have recommended my friends. 🙂

Just an English comment passing by: I would like to thank Flagito for the kindness and support they showed me. I recently had a problem with a flight company, and thanks to them I managed to get it sorted out and get compensation for the delay and trouble I had to go through. All in all, I am super happy with the service. 5/5, definitely recommended!

For a year ago, I received good compensation for the rapid and practical action of Flagstaff.