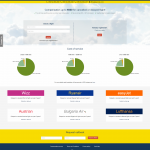 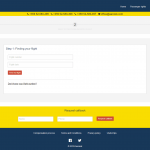 Founded in 2016, AeroIsk is relatively young but has already established itself as the best flight compensation company in Bulgaria. Unfortunately, there is no accurate information about the number of staff. Since it started operating, this airline claim compensation company began a mission to ensure that every passenger who has experienced aviation service disorders such as flight delays, missed connections, or cancellations can seek compensation from the relevant airline company. AeroIsk is not a scam, it is legit company operating under EU Regulation 261/2004. There is displayed more information in further review below.

Flight compensation company AeroIsk usually responds to customer requests instantly, though their website supports only three languages – Russian, English and Bulgarian. There are multiple ways of communication offered by the service such as through email, phone, Facebook chat and live chat on their website, thus making user-experience better. Unfortunately, customer support is not personalized and AeroIsk does not find the importance to invest time for blog writing or providing news about the changes in eu flight compensation.

Concerning flight compensation submitting, Aeroisk.ru provides some features for their customers such as automated user friendly claiming form and mobile friendly website. Unfortunately, the information about the exact possible complaint amount is missing. The airline claim company provides access for users to see their flight claim compensation status. The registration process in the website is not facilitated as login through Google and Facebook is not granted. Sadly, flight compensation process is focused only on claiming and no additional tools for customers applying for air passenger rights are enabled. After all, the first try using Aeroisk.ru website went quite smoothly.

Flight claim company AeroIsk seeks transparency – many details of its activity and team members are provided to public.Their Facebook feedback has an incredible score of 5 out of 5 from satisfied users, unfortunately, there is no possibility to check the reality of customer satisfaction as TrustPilot account is not registered. Another important fact in favor of AeroIsk is that it encrypts all the customers data and complies with the cookie, whereas it doesn’t meet GDPR policy. Still, this airline claim compensation market player is not very active on social media channels.

Helped to get compensation for a detainee for a day flight Bulgaria air. Thank you for the good service and 100 % escort at all stages.

Thank you so much aéroisku and Nina for helping to receive compensation from Bulgaria air. The start of the vacation started with the delayed flight of spb-Burgas for 7,5 hours, sat the night from 24 to 25 June 2017 In Pulkovo, on the return, decided to try to Sue the carrier. What was the surprise when, after 4 months, aéroisk wrote that Bulgaria air listed compensation. Very happy not to say anything. Didn’t hope to get anything, and here, such luck) need to fight for their rights, I have once again made sure of it. Aéroisk, thank you!

Didn’t expect it, just tried it. And it’s done. Compensation received! Thanks to Nina and the whole team. On my page everything described in detail… For all who fly planes (not Russian! ) and… they’re delayed. I won the court. It was like that. Last year we flew from burgas (who doesn’t know, it’s in Bulgaria). The departure should be at 13, it was moved to 15. We arrived at the appointed time, but the plane had to wait 4 hours still. The people were outraged to the limit. No information, no water bottle… for all questions: “flew out of sofia”. from Sofia to burgas 40 minutes to fly. We are waiting for 4 hours… Finally a miracle is done. We’re on a long-term plane with broken plans for the evening, no apologies, compensation, meagre food and a flight in the night… Yes, it was “Bulgarian air”. After months, three here on FB, I caught an aéroisk ad with some non-trust comments in the feed. Wrote to them about his sadness, guys all checked out. The decision took fast – my case was sued. 1200 euros for 3 tickets. Next is proxy and waiting for six months. Bulgarian air first offered compensation for tickets. I refused. The other day from aéroisk came the letter “happiness”. so on the bank account I received 800 euros (25 % reward of the company).

Nina, well done! Definitely, I recommend the service of aéroisk, in dealing with controversial issues with airlines.

Thanks to the collective aeroisk for helping to receive compensation! Special thanks to Nina for work! I recommend.